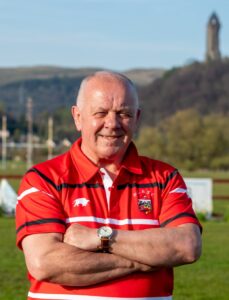 Retiring from playing in 2001 he coached the 2nd XV for two seasons before taking on the 1st XV Forwards coach role in 2002-3 when Richie Dixon left to coach Scotland. He spent 6 successful years as Head coach at Grangemouth RFC from 2003-2009 before returning to the club for a four year spell where as Director of Rugby he led County back in to the premiership as Division 2 champions. In 2003 he moved overseas to coach OMBAC (San Diego) in the USA Super League where he led them to National title in 2006 and won the Coach of the year award.