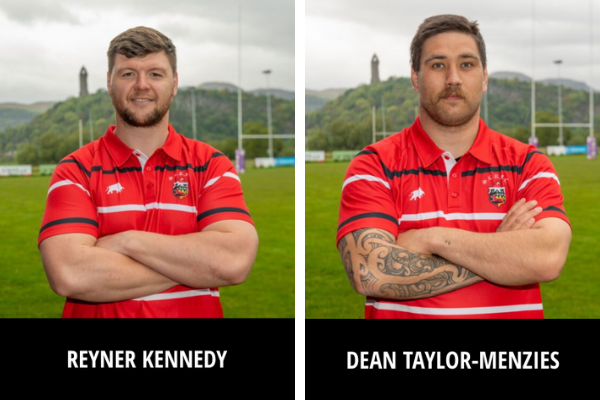 Behind every successful team there are great leaders, Reyner Kennedy will be continuing on the important role of Captain for season 2 of FOSROC Super6 and Dean Taylor-Menzies will be Vice-Captain.

Captain, Reyner Kennedy, was born in Stirling and grew up just outside in the great town of Alva. He started his rugby career aged 4 at his local club Hillfoots, where his dad played, and enjoyed 9 years of junior rugby there.

He then moved to Stirling County aged 13 and played through the club at under 15/16/18 level, before making his 1st XV debut at age 17. Following on, Reyner was made Captain of Stirling County 1st team in 2019 and was then asked to be captain of the FOSROC Super6 team last season as well as the forthcoming season.

Reyner had this to say about being selected Captain two years running: “Being asked to be Captain of the Stirling County Super6 again for season 2 as a great honour and I’m really looking forward to the up-and-coming league campaign.

The last year has been crazy and pretty disrupted in terms of training as a group, but we have been back together for the last few weeks and the squad is coming together nicely. With the long break everyone within the squad is excited to get the league started and feel we are in a good place for a successful season.”

Born and raised in New Zealand, Vice Captain Dean’s earliest memories were hanging out at the rugby club with his brother watching his Dad play. Dean picked up a rugby ball as soon as he could run and hasn’t looked back.

Rugby has enabled him to travel the world, make great friends, and has given him opportunities he never thought were possible. Dean has been lucky enough to play around the world. He names his greatest rugby achievements as being able to play some games alongside his dad and brother as well as captaining Australian Club Associates RFC from 2016-1019 including a Premiership title in 2018.

He made the move to County mid-2019 with his wife and son to play in the inaugural FOSROC Super6 competition.

Dean had this to say regarding his move to Stirling County and his selection as Vice: “The boys are awesome and were so welcoming, so to be asked to be their Vice Captain is something I take great pride in. Unfortunately Covid interrupted that first season but I know everyone at the club is looking forward to making up for lost time and ripping in once we kickoff for this coming season.”

Head Coach, Ben Cairns, had this to say about the selection of the Captain:

“We are delighted to retain Reyner as our captain for the upcoming FOSROC Super6 campaign. Reyner really grew into the Captain’s role in season 1. He has continued to lead by example throughout the lockdown period. He is fully committed to the County jersey and wants to be part of a successful club. Reyner has the respect of his peers and will be ably supported by our senior players group”

For more information on the up and coming season, please follow this link.