A young Stirling County 7s squad, made up of 1st and 2nd XV players, travelled to the Greenyards on Saturday to take part in the Melrose 7s, which made its return since the pandemic began.

First up for Stirling was local borders side, Hawick. Hawick opened the scoring on the fifth minute through Glen Welsh who spotted a gap in the county defence and went through to score. Welsh converted his own score to make it 0-7 to the Greens. From the kick-off, county moved the ball quickly to the left touch line to find Mikey Heron who used his speed and strength to go in for the score. Iain Kay added the extras to make it 7-7. Just before half time, County were back on score board and Hawick were stripped of possession by Harvey Cameron Barr. The ball was moved quickly to Heron who linked up well with Keir Singleton who accelerated for the line. Half time score: Stirling 14 – 7 Hawick.

The second half started with the Bridgehaugh men moving the ball quickly into the hands of speedster Cameron-Barr who got in behind the Hawick defence, some great scramble defence by Hawick saw Cameron-Barr get tackled just inside the Hawick 10-meter line. Cameron-Barr managed to get the ball away to Iain kay who passed to Callum Beckett to take the score to 19-7. Kay converted making the score 21-7. Things began to get worse for the Greens as they were forced back into their 22 through good defensive pressure, Stirling were awarded a scrum through a knock on which gave County an opportunity to launch from. The ball found its way to speedster Cameron-Barr who raced to the line to score. Kay added the extras taking the score to 26-7. Hawick moved the ball well from the kick-off and got a midfield break, but the support was slow in getting there which allowed Lewis Burns to win a penalty from the tackle area. The referee deemed Huggan to have performed an illegal act and was showed a yellow card. Burns tapped the ball and a few passes later Singleton was under the posts for his second of the day 31-7.

Stirling were not finished there and from the kick-off applied good defensive pressure forcing Hawick back, a good clear out at the ruck saw the ball knock on, county applied excellent scrum pressure and regained the ball. Beckett found Heron in space who broke the line, and it was that man Singleton in support who went over for his third. Beckett added the extras making the full-time score 40-7 to the men from the central belt.

The men from Bridgehaugh were full of confidence as they faced the British Army in round two, a big support welcomed both teams on to the Greenyards pitch. County started off well moving the ball from touch line to touch line. A high tackle from the army resulted in a penalty to Stirling. A quick tap from Lewis Burns saw the ball moved quickly to Harvey Cameron-Barr who found space on the outside of the army defence which brought the crowed to life. Barr was tackled into touch on the Army 10 metre line. From the line out the army got the ball into the hands of number 14 who showed blistering pace to outrun the Stirling defence 0-7 to the army. Stirling were awarded a line out from the kick-off and quick thinking from Keir Singleton and Thomas Quigley saw the ball moved to midfield. Stirling was unfortunately turned over, but regained the ball from an army knock on. From the scrum Stirling showed good patience and managed to release Cameron-Barr down the right hand touch line but good army defence saw that attack come to an end on the army 10 meter line. Three passes later the army were under the post for try number two which took the score to 0-14 with four minutes played.

Stirling’s efforts were rewarded just before half time with some creative play at the kick-off from Mikey Heron the ball was moved to Lewis Burns who linked up with Iain Kay who broke from his own 10 metre line. Only to be tackled short of the army line. Stirling was awarded a penalty from Kays break which saw Burns tackled a meter short of the line. Quick hands from Callum Beckett found Kay on the touch line to take the half time score 7-21. The second half started in similar fashion to the first with the army putting on some real pressure, eventually scoring five tries. County continued to move the ball well and made inroads into the army half and got the last word in the game to the delight of the Greenyards crowd. From a penalty the ball was moved at pace to Iain Kay on the left-hand touch line, Kay delivered a sub-line offload to Beckett who linked well with Heron and Ben Yarrow who found Dan Tomanek. He then found space in the army defence and raced over for the score making it 14-43 to the army at full time.

Captain Mikey Heron had this to say about the day:

“We were a super proud bunch of boys today, all really thrilled to be involved in the Melrose 7s. I thought all the boys involved played really well and showed a lot of skill, especially in the first game beating Hawick – a quality premiership side. We were unfortunate in the second game, being knocked out by the British army who were a very fast and skilful side. Overall, it was a fantastic tournament to be involved in, can’t wait to go again next year. Special thanks to Pete our coach for having us so organised between games.”

“We set out to have some fun and enjoy the experience of Melrose 7s and we have achieved that. The players have done themselves, the club, and our rugby community proud to be the first Stirling team to have made it past the first round in some years is a massive achievement. We would like to thank Brendan Molloy and Mike Sherlock for looking after us and to the Greenyards fans for their support.” 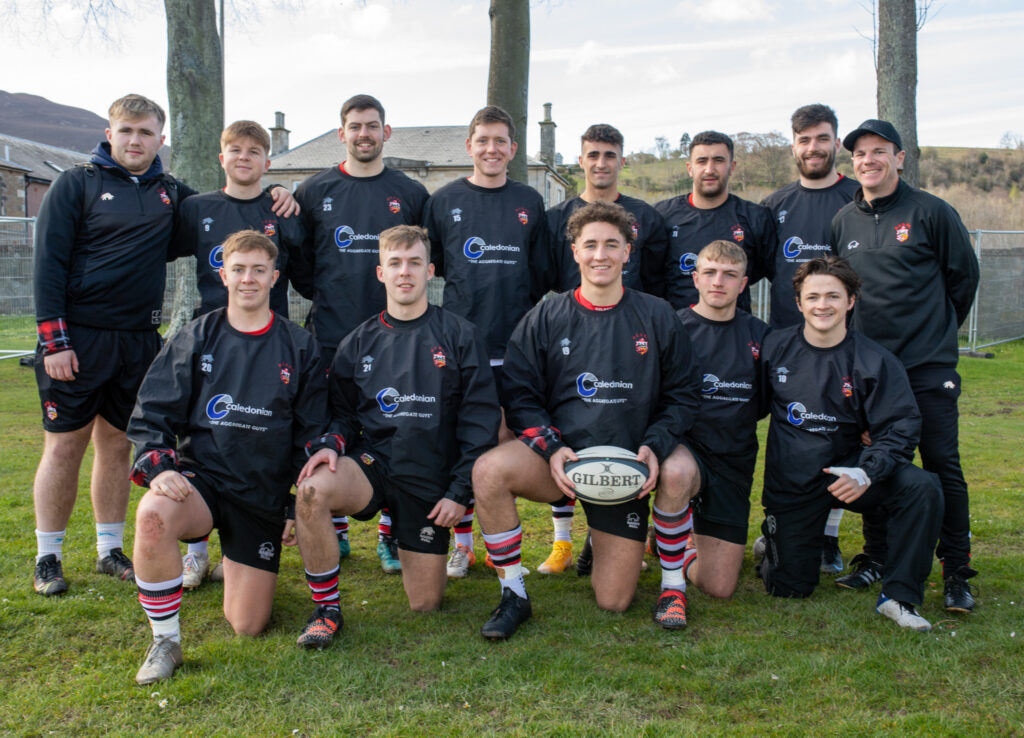