Stirling County Rugby Football Club has lost one its finest. Ralph McNaught was a former player, a past President and was the team manager when County won the old first division championship in 1995.It is hard to think of any jobs at Bridgehaugh that Ralph hadn’t done. He was devoted to Stirling County and in return he was loved by as many generations as are at the club.

The job he did best was one for which thee was no job description. He inspired and encouraged young players. Ralph had a gift of being able to connect with people. Always with a twinkle in his eye he would talk with and tease our players, welcome visitors and visiting officials, chat with club members and supporters. Clubs are built on people like Ralph.

Ralph was born in Dumfries 31st July 1936, second son of Elizabeth and William McNaught. He is survived by his elder brother, Derek.

Ralph spent his early childhood in Coventry (he moved there with his parents during the war – leaving his elder brother with an Aunt in Motherwell), returning to Motherwell to start high school at Hamilton Academy. He was always keen on sport and on leaving school went to Jordanhill School of Physical Education in Glasgow. At the same time Joan, who was to become Ralph’s wife and lifelong love, started her PE teacher training at “Dunf” – Dunfermline College of PE in Aberdeen, and they met whilst in their first teaching post at Motherwell Junior Secondary. Ralph offered Joan a lift home after hockey training, and the rest is history!

Joan and Ralph married in Glasgow on Ralph’s birthday – 31st July 1961 and lived, for a short time, in Glenrothes where Ralph co-founded Glenrothes Rugby Club, which is still going strong today. Wendy was born two years later and the family of three moved out to Singapore where Ralph had taken a three year post teaching in a British Army school. Whilst in Singapore they had two more children – Alan (born 1965) and Lindsay (born 1967) and enjoyed the help of a much loved Amah. Whilst there, Ralph was capped at stand off for Singapore.

The family returned to Scotland in 1968, sailing home on the famous Achille Lauro cruise ship. They settled in Bridge of Allan with Ralph joining the PE dept at Riverside Junior Secondary School until it became a primary school, at which point he took up the post of Head of PE at Bannockburn High. In 1977, Joan and Ralph were “pleasantly surprised” with the arrival of their fourth child, Anne who completed the family. Ralph remained at Bannockburn High until his retirement in 1995 and enjoyed many school ski trips abroad to Italy and France, and canoeing camps in Kenmore.

At Bannockburn High he taught and inspired many pupils. He taught all sports but rugby was obviously a passion. At one point he had a dream team with future Scottish internationalist Ian Jardine, future club president John Wright and, adding the star dust to the team, future County legend Tommy Evans. With that McNaught twinkle he would cajole other staff members to make sure the boys’ homework wasn’t too onerous. ’We don’t need these boys to be able to write or spell, we just need them to be able to run straight with a rugby ball on Saturday’.

There was a moment of madness that neither John nor Ian will ever forget. They were on a Ralph inspired school boy adventure of an overnight walk through the treacherous Lairig Ghru pass in the Cairngorms. Ralph packed the boys kit and sent them on their way. When they came to make camp for what was left of the night, they were horrified to discover Ralph had forgotten the tent poles!

Ralph thoroughly enjoyed his retirement, spending most mornings at SCRFC and most afternoons with his pals on the steep slopes of Bridge of Allan golf course. He enjoyed lots of lovely family holidays but most of all enjoyed the company of his grandchildren. There are 3 grandson’s – Jamie (age 24), Cameron (age 22) and Corin (age 18) (the boys all followed in their Dad and their Gramps’ footsteps with a love of rugby, playing primarily for George Watson’s College) and four granddaughters – Olivia (age 9), twins Holly and Grace (age 7), and Elise (age 2).Ralph was as proud as a man can be when Holly and Grace (who are now keen members of Stirling County micros) led the team out as club mascots earlier this year.

Ralph had a very positive attitude to life. He enjoyed it! He was great company. He was a teacher and a mentor. He will be sadly missed. His legacy will be the inspiration he nurtured in so many youngsters over the years. 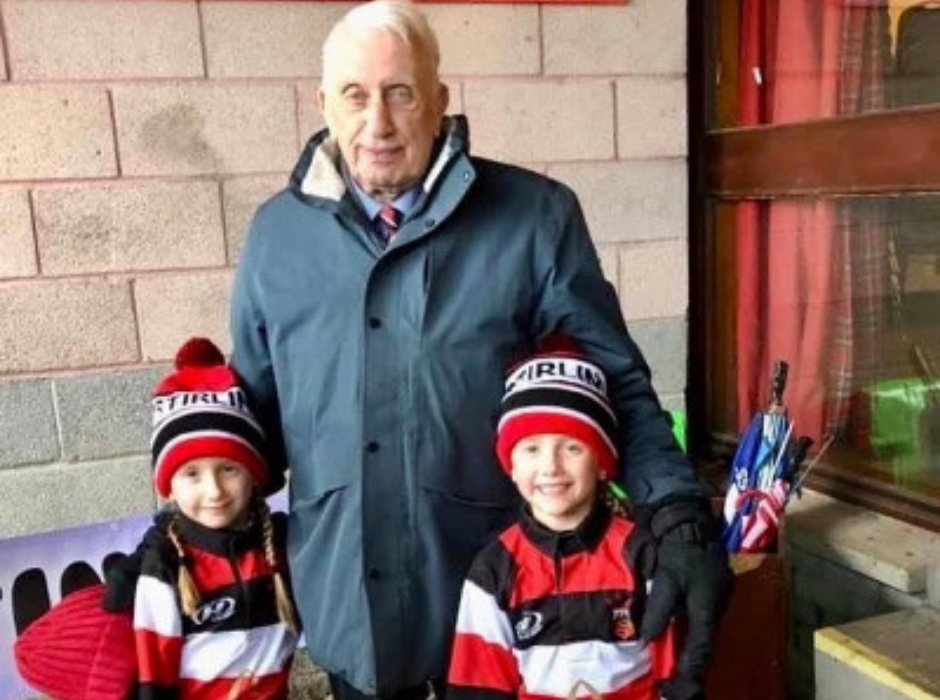