Match report from this weekend’s FOSROC fourth Super6 match, and a nerve-racking match it was. Stirling County went up against Ayrshire Bulls Friday evening at Bridgehaugh with a late night kick-off.

County’s fly-half Andrew Goudie kicked-off Round 4 of the FOSROC Super6 game. In the first ten minutes Stirling did well to get the ball over the Bulls try line however Ayrshire managed to scramble and held them up and a goal-line drop out was awarded.

The first points of the game came in the 23rd minute where Stirling’s right-winger Stevie Hamilton scored a try, however the conversion was missed. [5-0]

A yellow card was shown to No.15 Tom Roche in the 27th minute and the Bulls managed to earn their penalty points as No.10 Matt Minogue slotted the ball through the uprights, however there were no conversion points. [5-3]

In the 36th minute another yellow card was shown to County’s No.1 George Breese, No.18 Lewis Skinner was then brought onto the pitch as No.14 Stevie Hamilton was taken off.

Bull’s took advantage of County’s 13-man team and scored themselves a try in the 37th minute, following through with a successful conversion. [5-10] 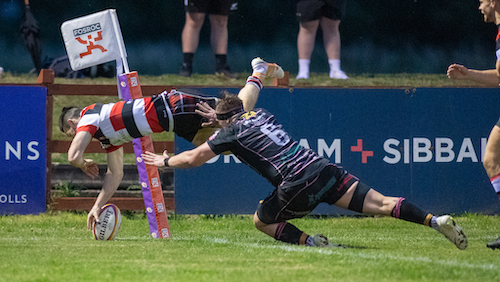 However, County were quick to push back with a try from Captain Dean Taylor-Menzies, but no conversion points. [10-10]

Quick off the half-time mark, Bulls Ryan Sweeney scored a try in the 42nd minute, however missed their conversion points. [10-15]

County’s George Breese and Stevie Hamilton both went back on after serving their 10 minutes in the sin bin and No. 3 JP Phelan stepped off the pitch.

The 47th minute showed a yellow card to Ayrshire Aaron Tait and the Bulls were down to 14-men.

Stirling County pitched a perfect line-out leading to an amazing try from No.2 Angus Fraser in the 49th minute, however no conversion was made, so again they were tied 15-all.

However, Stirling weren’t staying tied for long, as full-back Tom Roche scored a try in the 55th minute, however no conversion points were added, giving County a five-point lead. [20-15]

The 59th minute saw No.20 Ali Mackie onto the field for Captain No.6 Dean Taylor-Menzies. 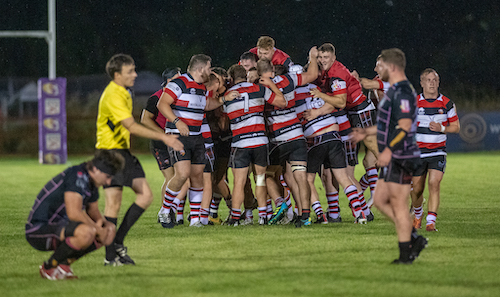 Not long after No.16 Reyner Kennedy scored a try for County, which was then successfully converted by No.10 Andrew Goudie, giving Stirling a strong 12-point lead. [27-15]

In the 63rd minute No.12 Craig Jardine came off the pitch and No.22 Landon Hayes stepped on.

A penalty conversion was awarded to Ayrshire Bulls in the 64th minute bringing the points gap to nine. However, shortly after Ayrshire were awarded another penalty and the points gap tightened. [27-21]

With full-time in sight, Ayrshire scored a try and successfully converted, giving the Bulls a one-point lead with two minutes to go until the whistle blew.

In the 81st minute, our hearts were in our mouths. County were awarded a penalty and you could cut the tension in the stadium with a knife. Craig Robertson stayed as cool as ice and pinned the ball in between the uprights to give County the win that they ever so much deserved! [30-28]

The full-time whistle blew at Bridgehaugh and the stadium erupted. What a performance from Stirling County at Bridgehaugh yesterday in their fourth FOSROC Super6 match! Well done boys!

It was a nail-biting but none-the-less excellent game of rugby at Bridgehaugh yesterday night, and again that’s another round of FOSROC Super6 complete. Big congratulations to the players and the team and let’s hope we can do the same next weekend and our next fixture!

Stirling County are at Meggetland next Sunday, where they will go up against Boroughmuir Bears with a 1:30pm kick-off.

Ben Cairns commented on County’s first win of the season:

“We needed that win tonight if we are going to do what we want to do this season, which is to be in the final. Also, the manner of their score at the end to take the lead, if we had lost that game, it would’ve been hard to build the boys back up from that. You’d always try to come back from it, whatever happens, to dress it up, but it would have been really tough.”

“I’ve talked a lot about execution over the past few weeks and again I thought we played some really good rugby. We got ourselves going on the scoreboard which is great to see, and we are in the right area, we just have to stay there. I always back the boys to score if we have an opportunity to and that’s what they did, scored tries and intercepted.”